Susan brought me this quilt and I totally fell in love with it. I love

while growing up, my family used it as a source of fuel and heat.

Pinterest and Charley Harper were the source of inspiration for

Susan. She saw a similar quilt on Pinterest but wanted to do it

a little differently. She had some fabric designed by Charley

Harper and wanted to incorporate it into her quilt.

What a great cardinal. So much attitude!  I think that I may

have to create a fabric postcard of this one.

Susan and I discussed what to do on the quilt top. All I could think

of was “branches.” Luckily, Susan agreed. To be quite honest, I was

scared to death of how I was going to quilt in these branches.

I was going to draw up a paper pattern but decided not to. I  laid it on the floor,

hoping that inspiration would hit me.  The white areas reminded me of

Birch trees and the blue area, the sky.

have to work backwards on this quilt top. Usually, I stitch the top

onto the backing and work my way down the quilt-top to bottom.

With this quilt, I had to baste from the top to the bottom and then

work my way back up, from bottom to top. This was the only way

direction, growing up and not down.

Then, I had to decided which branches would be in front of what

trees and what branches would be behind other trees. Also, the

be. For instance, a small tree would not have large branches nor a larger

tree, smaller branches. Yes,alot to consider but , in the end, I did

enjoy the process of it all.

Working from the bottom and checking with my printed off

picture, I started marking with a chalk marker. It rubs off

easily so I don’t worry about removing the marks later.

not the blue pieced sky in the background. I wanted the trees to

stand out a bit more than the sky. I used a monofilament thread

as well, on the top and a grey on the backing.

been changing thread like crazy. The grey also works well with the

blue and white and stands out a little too.

I began marking in branches and decided that the bigger birch

trees would stand out in front of the smaller ones. Smaller

trees mean that they are further away. So, I could stitch

branches on the small birch trees but not on the bigger ones.

I started stitching in branches and it looked okay. I just had to

keep checking which trees I had stitched over and which ones I had not. 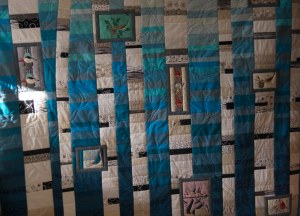 Here is the finished quilt. I think it looks great. I really

more freedom with your quilting. I enjoyed this quilt

so much, that I had to recreate it somehow. I didn’t have

a lot of time so I decided to make a fabric postcard.

I used a dark grey thread and stitched in branches. I really

liked how this little postcard turned out. I think I may have to

make a bigger version though.

See you next week.