for Northcott and Quilt Market. 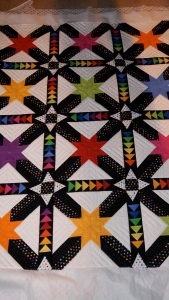 Flights of Fancy by Christine Stainbrook of Project House 360

Even though this quilt was pretty small, it was fun to work on.

I SID around all the flying geese, stars and straight lines. Once

that was completed, the fun could begin.

with a nice swirl. A variegated thread was used for this quilting so

that it would add some interest to the stars. The flying geese had the

the same thread used on them as well.

In the white sections, I used a white Glide thread (40wt) for the

straight lines.  This quilt felt modern so thus the reason for the 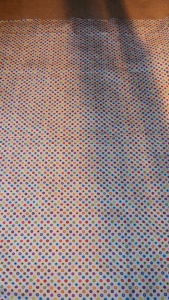 Back of the quilt. I used a 40 wt white thread for the backing.

It is pretty funky. The first order of business with me is to

complete the SID. Once this boring but oh so important step

is completed, then the fun can begin. 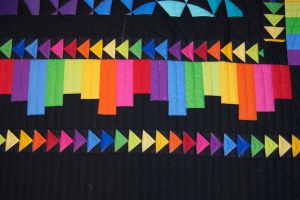 straight lines were added in the colorful border. I used a variegated

thread for the colorful strips and the flying geeese. In the

black sections, I used a 40 wt black embroidery thread. It is very

thin and works well on these quilts.

The backing is very neat. I used a black 40 wt thread here as well. 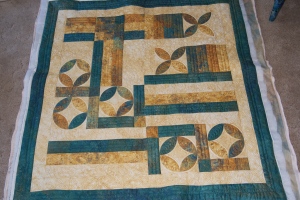 This little baby is a printed  panel. How cool is that? Even though

it is small, it still sucks up alot of time to complete.

In the background section, I quilted in swirls and circles-thanks

to Judi Madsen. The flower petals received half circles and the 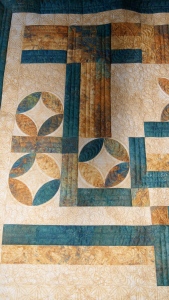 The circles also received half circles.

Using the same motifs on the quilt helps to unify it.

straight lines and arcs were stitched in.  The border is one of my

favorite parts of this quilt.

The outside border received  double straight lines, kind of like a

frame. The only problem with that, is that the border now buckles

heavily quilted and this section was not. I would do this differently

This fabric looks really rich. I love it!

I used a light brown 40 Metro thread for the backing.

Another section of the backing. I used 3-4 different shades of 40 wt

gold and a tan color. For the aqua blue/greeny border, I used a 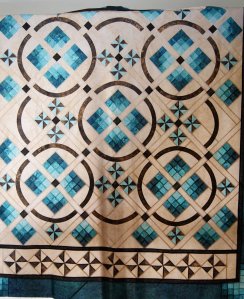 colors in this quilt. The batteries in my camera died the morning I was

I quilted around every shape in this quilt. In the outside aqua border,

matchsticks design. It took me 4 hours just to do the outside

border. It did look good when done though.

in the triangle areas around the pinwheels.  In the open spaces,

I added some squares. It helped to fill in some empty space and

it took me less time to do the  background fill. The background

the outside border. Again, I apologize for the absence of pictures.

Have a great week

As promised, here are some of the quilts I worked on for Northcott,

for the  upcoming Quilt Market, in Houston. Color Works is the name of

this new fabric line by Deborah Edwards. The new lines consists of 21

solid colors, 4 printed panels and 14 co-ordinate fabrics. As you

will see by the quilts below, you can mix and match all of these

fabrics and the combinations are endless.

“Soho” is the name of this quilt and it was designed by Jean Boyd.

The middle section is comprised of a printed panel. How cool is that? 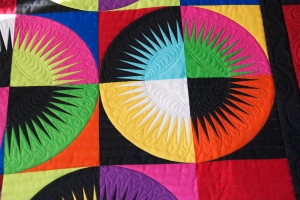 For all the SID work, I used a monofilament thread. It seems

to take on the color around it and hides well. In the circles, I quilted

swirls and circles around the pointy parts. In the background area, I 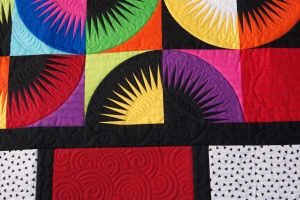 In the white areas, I used a white Glide 40 wt thread. I quilted in

The red area beside it, also received an Angela Walter’s style in the

form of swirls.  I used a Metro 40wt thread for that area.

This border area, is also a printed panel. Love, love, love the

flying geese and you don’t have to piece them at all. In this area, I

used the monofilament once again. I really didn’t know what color

to use, due to all the color variations so the monofilament seemed

like a good fit. In the flying geese, I quilted in angled lines and in the

The backing fabric is cool;it consists of a black background and colorful

circles. I used a Metro black 40 wt for the thread on the backing. 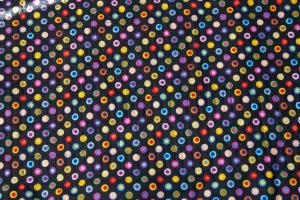 A close up of the backing fabric.

quilt.Looking on Pinterest, I saw this great circular quilting and so I

had to try it

Because my longarm is not computerized, I marked every inch

or so and then used my straight edge ruler to quilt in the lines. It turned

out pretty good, I only had to unpick a few areas. Circles are hard to quilt

because you can see every little squiggle that you make. I used a white

Glide 40 wt thread for the top and the backing. I really love how

playful this quilt feels when I look at it.

“Color Strata” by Jean Boyd is the next quilt.

This quilt also has a printed panel in the middle of the quilt. It makes my

job easier because all I have to do is follow the lines on the panel. I used a

thread on the rest of the quilt. I used alot of straight lines on this quilt. 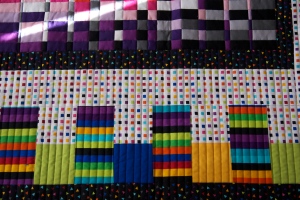 This is the border sections. I love the straight lines in this section 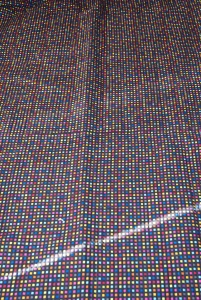 The backing consists of a black background with colorful squares in

There are a few more quilts but I will leave them for next week.

Even though I did’t post last week, I have been thinking about you all.

to quilt some of their samples for their booth. Thus the reason why I

have been missing in action. I will post pictures of their samples but

I have to get their permission first.

In the meantime, here is what I was working on prior to Quilt Market.

This is Jeanette’s lovely quilt. She makes them for her grandkids. What

this quilt. It has nice movement to it.

On the backing, you can see the design even better. I used a blue

polyester thread for the front and the backing.

Here is a larger picture of the backing. The design shows up nicely.

This is Mary’s quilt. She found the pattern online. Orginally, the

decided to make it larger and designed it into a quilt. Way to go

Mary!!  She wanted a modern design so she chose “Raindrops” by 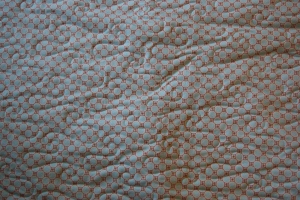 We used a cream polyester thread for the top and backing. I really like

Once again the backing shows up the panto nicely.

I hope everyone is enjoying the beautiful fall weather.

And Happy Belated Thanksgiving to all the Canadians out

Have a great week!