I am a cover girl, even though it is on the back of the

I was leafing through this magazine last week and came upon

this quilt on the back.

“I quilted one like this for Northcott last October” was the

thought that ran through my mind. Then I looked closer at the

quilting and thought”yes, that is the one I did!” 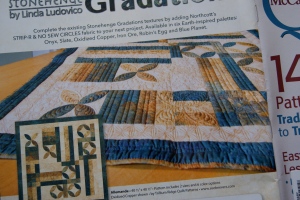 A closer look at the quilting .

You can read all about the process I went through to

complete this quilt at this link:http://stitchingimpressions.

Last week was productive in that I finished Joan’s

I apologize for the bright sunshine, wish that we

would have some more of it this week.

Joan wanted some modern quilting done on the top,

pebbles and matchsticks to be exact. I really love the

texture that this combination creates but after

But you just have to stick with it until it is completed.

and the backing. You would not believe how much thread

this kind of stitching uses up.

I started out with a 3,000 yard spool and it was half gone

by the time the quilt was completed. And the weight of

the quilt increases alot too, even with this fine thread.

A close up of the pebbles and matchsticks.

How can you not love this texture? 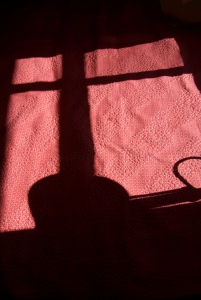 The backing fabric consisted of a peachy

red print. The green thread does show up

When you run your fingers over the quilt, the pebbles

feel like bubble wrap. I tried to make the pebbles a

The matchsticks quilt up quite quickly but the pebbles

do take alot of time.

This is a charity quilt that has been hanging around

for some time and needed to be completed.

Brenda was the piecer, she really is quite generous as

she has completed quite a few of these for the

These quilts are so much fun. In this case, I quilted around

the blocks themselves. I didn’t want to stitch any pattern

over them, so why not go around them?

You can see the quilting path that I took. I

merely outlined the pattern that was on the front

of the quilt. I used a light blue and white

polyester thread for the top and a dark green for the

Coverlets have been on my mind lately. 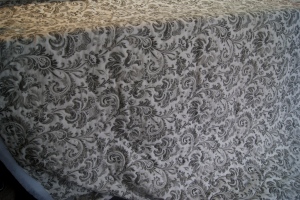 A local drapery store wanted  this coverlet quilted quickly so off

All I could think about was puckers on the back of the coverlet; that

Because my frame is only 120″ long, I knew that I would have to load

it on the frame at least 3 times. On the first attempt, I thought that it would

be better to put the extra 30″ on one side of the frame. However,  after loading

and winding it on the frame, the bunching was too much, so I had to take it off

and put it on again.

This time, I divided the 30″ evenly and ended up with an extra 15″ on each

side. It still bunched up a little  but it was manageable.

I quilted very sparingly but it still took some time. It felt like it went on and

on and on. When that was done, off it came again and then loaded back on

two more times so the 15″ on either side could be quilted. When it was all

said and done, there were no puckers.  Yeah!!

still like or need what you do. It was an experience and hopefully not

one in which I have to quilt another one so large.

popular today. Maybe I will have to put it on the list of things to try.

Dale always brings me interesting quilts. The designer is Canadian but

I can’t remember. Dale wanted me to come up with some creative ideas

but all I could think about was trees.

want to get too fancy, just keep it simple. So, I used some of the shapes

of the trees that were in the top itself , added a few deer, baby bears, and

Because the border consisted of a batik fabric that had leaves printed on it,

I thought “why not use that motif?”  So, that is what I did.  I outlined the

leaves  on the print and even added leaves in the white areas of the border.

It all works. I used a So Fine blue green/thread for top colored areas and

an Omni cream for the light areas. I also used a monofilament thread to

if I ran over the the raw edge applique. 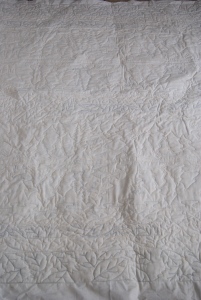 The backing is a batik cream color and it shows up the quilting nicely.

In the areas where I used the blue/green thread, you can see those shapes

on the backing. It really helps me not to have to worry about tension

issues when I can use the same colored thread on the top and the backing.

Thankfully, for me, Dale doesn’t mind this look at all.

This is also Dale’s. She is quite the fast piecer. Once again, she

practice being creative or some new designs.

with 2 double lines. It looks more classy to me this way.

Because the centre star is made up of a dark print, you really won’t

be able to see any of the stitching , so I quilted in some

but different lines as well. The white areas received a nice swirly fill.

It helps soften all those straight pointy edges of the star. 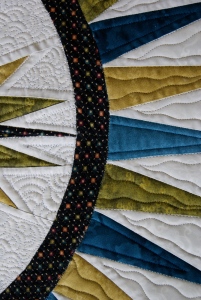 In the spokes themselves, I added straight and wavy lines, just to

In the white spokes , I added wavy lines and swirls so that it ties all

of the quilting together. I used a Glide thread, in white for the white

areas so that it stands out a bit more.

In the darker areas, I used a monofilament for all the SID and a

darker blue So Fine for the blue areas.

The backing is cool. I used a white So Fine thread for it and it 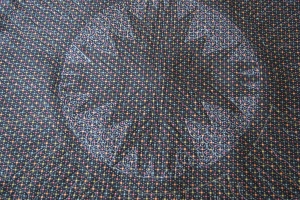 The spokes are hard to see here but they are there.

up with quilting designs.

I finally finished my Chameleon.

If you are in Toronto, in June, check him out at the Trend Tex

Challenge, at Quilt Canada. I am sure that there will be lots

of awe inspiring quilts to be seen. 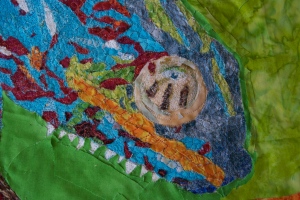 entire body ; then I added an extra layer of batting under the

eye. I cut off the excess and when I added the backing and

batting, it made 2 layers of batting under the eye. So, it really 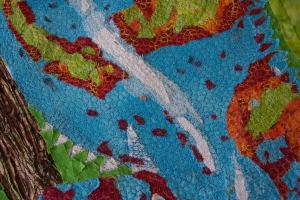 I love, love, love texture. So, I had to quilt in the scales on the

chameleon. Even though he wasn’t large, it still took me 5 hours to

stitch in all these scales. It was so much fun!!

While I was working on this chameleon, I came across this Japanese

quilter, Danny Amazonas. His color sense and art work are

amazing. Now, back to my little corner of the world.

Here are some other quilts that I managed to complete this

wanted a purple polyester thread for the top and the backing.

and doesn’t “read” purple on the quilt top.

I love the saw tooth border; it adds a lot of interest to the quilt top. 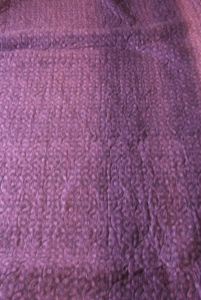 The backing always tells a different story than the quilt top itself.

of weight to it. 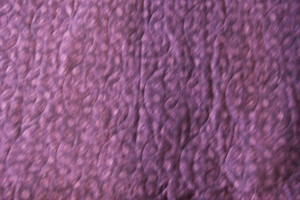 Donna created this beauty.  The blocks are quite large so

I used a Glide Cream thread on the top and the backing. And

“Bowknots” was the name of the overall quilting design.

All the blocks were different; adds a nice bit of interest to

the quilt as well.

than 2 blocks that are the same. What about you? Do you

Back of Donna’s quilt

The back was made of a cream print.  You can see the

pattern that was stitched on the top of the quilt.

Jeanette made this quilt. She is so good at using up all

of her fabrics that she has. 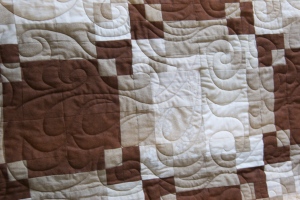 Linda Taylor’s “Feathers” panto was used for the stitching.

A brown polyester thread was used on the top and the backing.

It really shows off the quilting nicely. 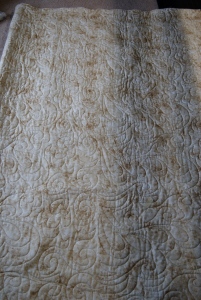 Back of Jeanette’s quilt. 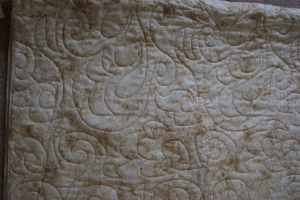 A close up of the backing.

What are you working on this week?  I’m not sure about

before spring gets here and cleaning fever hits.